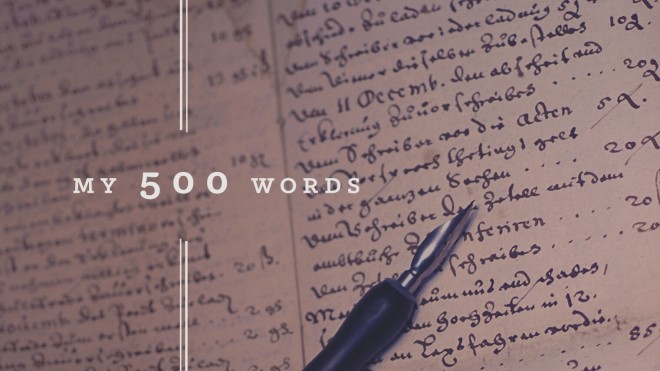 It sounded so easy. 500 words a day. Given how quickly I tend to write, especially first drafts, this was not a huge commitment. At least I didn’t think so. The reality, however, nine days in, is very different. So, today’s blog post is dedicated to the four big expectations versus reality moments of this challenge for me so far.

Expectation One: I would write at least 500 words a day in the same manuscript.

Reality: I have written 500 words a day on all but one day, but they have not been on just one thing. I have written the opening words to my non-fiction book, a partial chapter outline of that book, several blog entries, a long-winded diatribe in my journal, several creative writing exercises from the 642 Things to Write About book, and several really bad poems. I thought at the end of January I would have 15,000 words toward my book done. It’s not looking like that at all. The non-fiction, I’m finding, it going to require a lot more thought that I had anticipated (not to mention research and surveys).

Expectation Two: Having a goal to write would make it easier to get up in the morning.

Reality: It’s cold and snowy and downright gross in Indiana right now. And, I have a comfortable bed and really enjoy sleeping. So, getting up early has simply not happened. You can call it lack of focus or determination or whatever you want, but the reality is I like the fact that I don’t have to get up early. I am simply not a morning person. And, on the mornings where I’ve tried to get up and write right away, I just stare at the blank page like it’s the enemy. There is no excitement in writing like that for me.

Expectation Three: I have a lot to say, so the words would come easy.

Reality: Now, it’s been a long time since I’ve really even focused on writing, even just a little bit. But, the words are not coming easy some days. Some days it’s like pulling teeth to get even a hundred words out that I don’t want to delete from the world forever. Part of this challenge is not to edit too much;  and that is really REALLY hard for me.

Expectation Four: I would realize I’d rather write than do a lot of the other things that take up my time.

Reality: This is about half-true. I would rather write than a lot of the things that I do that are not things I choose to do. If I could spend the eight-plus hours a day I sit in my office at work writing, I would love that (I think). But the reality is that writing is not my job, it’s my passion. So, “working writing in” during the few hours I have that are not at work is sometimes difficult. Because I do love to read and I love to spend time with friends and I love to actually talk to my husband and play with my dog. My friend Amy said it best when she reminded me that to really take this writing thing seriously, some things would have to go. I think I’m still really trying to work through that idea in my head and heart, even though I totally know that it is true.

So, here it is day nine. I’ve written approximately 4,000 words over the last nine days. I just pray a few of them make a difference.