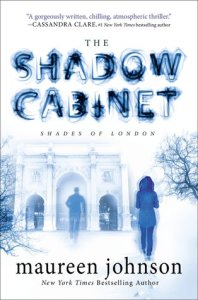 This series makes me happy.

Even though it’s creepy.

And a little dark.

And a little confusing.

And more books than I thought it would be.

It’s hard to talk about The Shadow Cabinet without bringing up the rest of the series. It’s hard to talk about this book without wanting to give you all the back story on Rory and Stephen and Callum and Boo. But, I’m not going to do that. Just read the other two books (The Name of the Star and The Madness Underneath). And then read this one. And then be mad with me that the next one isn’t even written yet. Because seriously, Maureen, you’re killing us here. (And I follow you on twitter, so I know your body is also trying to kill you. Sorry about that).

In The Shadow Cabinet there is this thing that has happened that must be fixed. Except no one knows how to fix it, or if it really can even be fixed. Rory will risk anything to try, though. She’s impulsive and dangerous like that. But, she might be the only one willing to take a big enough risk to make the impossible happen.

The Shadow Cabinet is all Maureen Johnson. She is a fun, flirty writer who creates just enough madness and confusion to keep her readers coming back for more. “The Shades of London” series is amongst her best. I’ll wait for the fourth one. Mostly because I don’t have a choice.