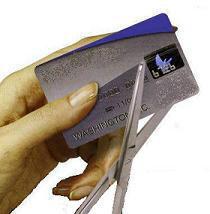 Something good, no great happened in my life at the beginning of September that I haven’t really talked about.
During college, I was pretty dumb with money, so I had a fair amount of credit card debt. After college, especially that first couple years, I wasn’t making much money, really, and still had expenses (including paying those stupid credit card bills) so I continued to live outside my means, thinking “I’ll pay it off someday.” That someday, though, seemed to get farther and farther away as time went on. The minimum payments were doing nothing to cut the debt, the interest rates were ridiculous, and I couldn’t seem to find a way out. I stopped charging, but still, the paying off was KILLING me.
I made a goal about 2 and 1/2 years ago to get out of credit card debt in 4 years. I found a plan I THOUGHT would help, moved all my debt to one lump sum (which was sickening to see that number) and started making much larger monthly payments. I thought I had found a way out that would be hard, but manageable. Eighteen months in, and the number wasn’t going down nearly as fast as I thought it would. I realized then that I had fallen victim to just another credit card company trying to get my business.
The kicker to me, though, was that I still managed to have excellent credit, despite my large debt. Paying on time and always making payments seemed to do enough to help counter-balance the number.
Fast forward to getting engaged and married. The day I told Tim what I had in debt was one of the hardest days for me. Admitting that I had failed – that I had been irresponsible and negligent and materialistic – was humbling. Tim is so good with money, so aware of every dime, that part of me was convinced he would want out when he knew how much i owed (and yes, we had this conversation BEFORE we were married, not after!) Instead, we made a plan. The – selfish isn’t the right word – guilty, maybe? – side of me refused to ask Tim to help. It was one of those, I made the mess kind of deals. But, help he did, not necessarily with paying the bills, but with encouraging me to switch the debt to a lower interest rate, and by paying for many of our necessities himself so i could focus on ending the debt cycle.
And it’s over. On September 5, I made my last credit card payment. No more accrued debt, no more dreading seeing those credit card emails come every month. And, I made myself a promise, and a promise to my spouse – that it will NOT happen again.
Do I still have a credit card? yes. Have I made a couple purchases on it? yes. will it be paid off when the statement comes? yes. I learned my lesson, and I thank God I learned it young, but I am so glad to be out of that cycle.