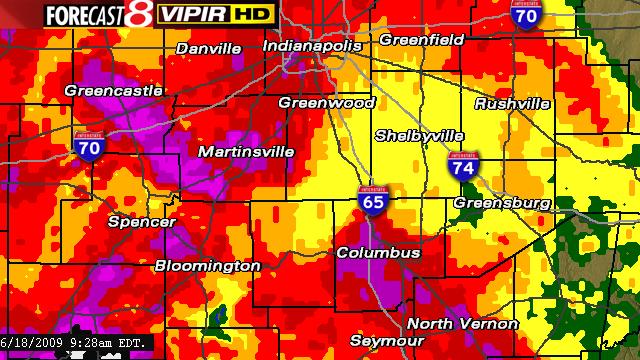 This is the radar image of what is happening outside right now, according to Wish-TV 8 in Indianapolis. It doesn’t look good, does it?

How similar is that to your life? I know it’s pretty appropriate to mine! There is always a storm blowing somewhere – bills, health issues, family issues, work issues, faith issues – and it’s easy to just sit in my little world and pretend it’s not there – pretend there isn’t something raging right outside the door. The problem with pretending there is no storm is that sooner or later, it will make itself more obvious. Lights will flicker, hail will fall, trees will be struck with lightning. There comes a point when you can no longer pretend the storm isn’t there and you have a choice – deal with it or cower in fear. Me, when it comes to storms, I like to cower. Especially at night. I don’t like the thunder and lightning in the dark. I don’t like not being able to see what is coming and see what might be lurking just outside the window. This is a new thing – a recent change and quirk in my personality.

What I’ve realized is that I treat my personal storms the same way. I hide from them until I can no longer ignore that they are real. And then, the walls come crashing down, my tears flow and my world starts spinning into that strange darkness where I can’t see what’s coming next. Now, let me emphasize that right now is NOT one of those times. I feel pretty good. There aren’t any big storms in my life right now. Sure, there is the normal stress or work and home – being a good wife, a good friend, a good daughter and sister. There is the constant stress of wanting to be 30-40 pounds lighter and the constant storm between being lazy and being strong. But those are all little storms.

I know people who are in the storm of uncertain health, waiting for a diagnosis or a surgery that will change their lives.

I know people who are in the storm of lost jobs, hoping to find a way to support themselves and their family.

I know people who are in the storm of loneliness, those they love far away from them.

I know people who are in the storm of war, waiting for loved ones to return and then leave again.

I know people in so many storms, and I know so many people who aren’t revealing their storms at all. But, those storms exist, and they are powerful, and they are damaging.

While my heart wants to calm the storm and drive the rain clouds away, I know I cannot. Sometimes the storms have to rage, just so we can see what happens when they are over. After the tornado, there is often a rainbow. After all the rain, the sun comes out again. And, at least for me, I tend to appreciate the green grass and the blooming flowers a lot more after the storm has passed. The same is true in life – the storm is scary, disheartening and even frightening. The storm shakes your world, your faith and your life. But, the storm will end, and when it does, you will see a new place, a new piece of your world, fresh from near-destruction, but already rebuilding, vibrant and alive.

So, keep the faith during the storm. Don’t be afraid to be afraid. But, when the storm is at is peak and everything is howling and shaking around you, remember that it will end. It has to end. And that end is really just another new beginning.