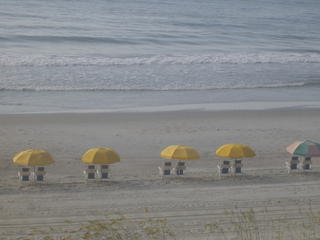 This is Myrtle Beach from my hotel room. Don’t let the over-cast look fool you…it was very early in the morning and soon the sun was out in full-force doing frying us all like eggs. The umbrellas and chairs are nice and can be yours for $25 for the day. You can rent one for the week, as well. We went ahead and rented the umbrella/chair combo when we spent the whole day on the beach. Believe me, by about 11:00 a.m. having a little shade was a very VERY good thing. The lifeguard at our station was funny. He was there before 7:00 am every morning to put out the chairs and umbrellas and then proceeded to take them all down again around 4:00 pm. I guess that’s part of the job and he got a great workout everyday, but still…that’s a lot of work. Anyway, hanging out at the beach was wonderful. It’s amazing to me how much time we spent doing just nothing all day.

Playing in the waves, because you can’t really swim in the ocean, and watching people. We spent literally HOURS outside and I loved it. Because I was under orders to not burn on this vacation, I applied the sunscreen every 90 minutes or so. Well, the first time I applied sunscreen…the second time it was some sort of sunscreen/sand combination that was both painful and exfoliating at the same time. 🙂 Our hotel was right on the beach, which was nice. The hotel itself was kinda gross, though. If you’re planning a trip to Myrtle Beach, I would not recommend the Days Inn on the Southside of the beach (Myrtle Beach, not North Myrtle Beach). It was relatively cheap, but also kind of dirty and hot and poorly designed…who puts the air conditioner unit on the floor so it blows hot air out onto the CONCRETE enclosed balcony anyway? 🙂 Ah well, it was still nice. 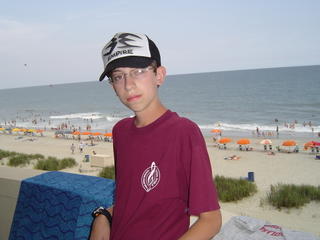 This is Cameron at 14 looking all smug about life. It kind of makes me laugh, because he’s such a calm and quiet person all the time, and this picture shows so much more attitude than he normally has…although he’s turning into a very good teenager – too cool to hang out with the family and goodness forbid he really ENJOY spending time getting beat to death by waves in the ocean…but whatever. I love him and we’re a lot closer than most siblings with a 12 year age difference, I’m sure. It’s strange to think about him growing up and getting older and that he’ll be graduating from high school in four years. Ah well. I know there won’t be many more ‘family’ vacations that are just the four of us (for several different reasons) so I’ll just enjoy them while they are available. 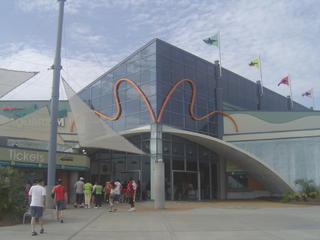 Ah, the Aquarium. Anyone who knows me knows I love sealife and fish. I have a new favorite marine animal, though, and that is the stingray. At this aquarium, you can actually PET them. It was really cool. Despite the myths and assumptions, they are actually very docile animals and love to show off for the crowd. They would come out of the water and flap up on the sides and everything. They were so much fun! I’m in love! 🙂 The other two big things at the aquarium are the moving walkway that takes you through 180 degree aquariums where the fish swim over and around you – as do sharks and sea turtles and other creatures- and the Titanic exhibit that gives a timeline, information, and all sorts of material about the million little things that went wrong to doom that voyage. They had a bowl of the 28 degree water that the people on the ship were plunged into…after just a few seconds, my fingers hurt. At least for most of them, death came quickly. The aquarium was nice and fun, but I think my favorite aquarium is the one at Newport. Fish, puffins, and penguins – what more could a girl want? 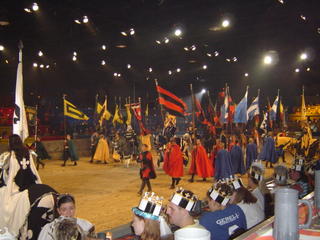 Probably the highlight of the trip was going to Medieval Times. This is something I’ve wanted to do for a really long time and to finally get the chance to do it was great. It’s a little expensive, but totally worth the money for dinner AND a show. It’s fun and exciting and everyone who goes can’t help but get into the act. We had a really good time and had really good seats. Our Knight was the Black and White Knight, and he rocked! Seriously, if you’re looking for a fun evening and want to do something a little different, find one of these shows!!!

We also spent a day at the water park, but all in all, it was just nice to get away and not have to think about work and other stuff and just enjoy spending time with my family. It’s hard to be back, but that’s to be expected with vacations, right?