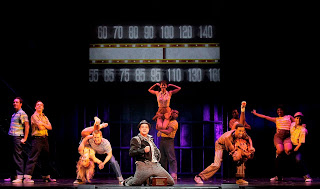 There are very few musicals that I go into knowing basically nothing about them. Memphis, however, was one of those shows. I vaguely knew it was about a white DJ playing black music in the 50’s in Memphis, but that’s about it. What I didn’t know was that it would be a heart-breaking, challenging, emotional two and a half hours brought to life by a spectacular cast, music and sets.

From the very beginning, Memphis is about the power of music and the way music has the ability to transcend the darkness of our world and bring people together. It is a show about living on the “wrong” side of the tracks, falling in love despite all the challenges, and choosing to believe that the way the world is now isn’t the way it always has to be.

The entire cast of Memphis is spectacular. But the show simply would not be what it is without Bryan Fenkart bringing the title role of Huey Calhoun to life. Bryan makes Huey a sympathetic, simple and emotionally-charged character. He refuses to see the world as it is, black and white, and chooses to see what the world could be. Calhoun may not be the smartest person in the world, but his emotional depth goes well beyond his IQ. Fenkart’s Huey is optimistically naive – he believes that love can conquer all, that music can bring people together and that the world can and will change. While he becomes a champion or rhythm and blues music and the people who sing it, he also becomes a champion for everyone in the audience who wants to live a different life in a different world than the one they currently occupy.

There are several show-stopping moments over the course of the 2.5 Memphis experience. As Huey and Felicia (brought to life by the vocal powerhouse Felicia Boswell), an African-American soul singer, fall in love, she knows that the obstacles could be too much. Huey chooses to believe just the opposite -that together they can change the world. Their story, told through music that sticks in your head and heart, is one of passion and power. Of all the songs, there are two that stick out the most to me, however. The first is “Say a Prayer,” the ending of Act 1. When Huey and Felicia are discovered, they are attacked. Recovering in a bar on Beale Street later, the power-packed “Say a Prayer” is about finding the strength to go on – despite race, despite fear, despite the horror the entire cast had just seen.

And then there is “Memphis Lives in Me,” Huey’s standout song toward the end of the show. Bryan brings this song to life, revealing why Huey would choose to stay in Memphis, the city that he loves, instead of leaving. It speaks of the power of his love for his city, the power of the music that shaped him, and the place where his heart is home and his soul is filled. Memphis may not be perfect, but it’s home, and that’s what Huey realizes. It’s a powerful, breath-taking moment of theatre. Without this moment, Memphis is a great musical that tackles the very real issue of race relations in the south during the very beginning of the civil rights movement. With this song, Memphis is a story of all that, plus a love song to a world that can change and a place to call home.

Memphis closed in Cincinnati today. You can still catch it April 2-6 in Louisville before the tour ends in Early May. Don’t miss Memphis. It will change you and give you hope!

Thank you to the great people at Broadway Cincy for the ticket!