Okay, so there have been a few things that have happened since I last blogged. For some reason, I just haven’t let myself sit down and write, so be warned – this could take awhile. I’ll try to cover all the highlights, at least.

Labor Day Weekend
Yes, I know I haven’t posted since right before the holiday. However, my 3 day weekend was FANTASTIC! Tim and I went to see Charlie and the Chocolate Factory on that Saturday. I really enjoyed it. Johnny Depp is just such a talented actor, it’s hard for me to not like something he does. And the boy who played Charlie – well I fell in love with him during Finding Neverland, and he didn’t disappoint. For the sake of the entire movie watching world, I hope Johnny Depp never takes a ‘traditional’ role. He’s a fantastic actor, and I love that he constantly stretches himself to new and amazing levels. Anyway, enough about him.

On Labor Day, Tim and I went to Holiday World. I had never been, but Tim went all the time growing up. It was a lot of fun – honestly more fun than I thought it would be. We only rode a couple rides in the theme park side of it and spent most of our day in the Splashin’ Safari waterpark. Okay, that was huge for me, I’ll be honest. For someone who is pretty self-conscious about their body ALL THE TIME, spending hours in a bathing suit in front of a lot of other people wasn’t something I was real excited about doing. However, there is something beautiful to be said about spending a day at a waterpark with someone who loves you just how you are. I can’t say that I felt comfortable but I felt accepted, and that was important. I was able to let go of my inhibitions and just enjoy being with Tim and playing in the water. The weather was perfect – somewhere in the 80’s and sunny. Not too sunny, though, so there were no sunburns to be had. Anyway, it was a great day and I had a great time. I felt good and loved and just enjoyed being away and having a lot of fun together.

September 6
On the sixth, I finally had to do what I’d been avoiding for awhile. I said goodbye to my close friends Paul & Abigail and their kids. They’ve made the move to Ireland. It was so hard to say goodbye. I tried not to cry, I really did…but it didn’t work. Cry I did. However, Paul and Abigail are there and doing great. It’s beautiful. Here’s the view from the top room in their house. 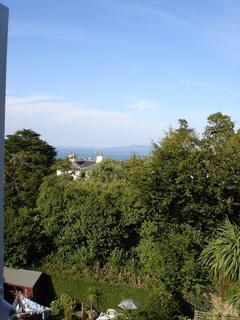 So much beauty. I’m so happy for them. I can’t believe they’re gone, but I’m so excited to see God moving in their lives and answering their prayers in such a real and powerful way. Their daughter is in school and loving every moment of being a kindergartener. Their son has acclimated fine. Abigail seemed genuinely happy in her email. There is still so much to be done – packages need to arrive and the work visa needs to go through, but there is a certain peace in knowing they are right where they need to be – in the Killiney part of Dublin.

Katrina
I haven’t blogged about the devastation in New Orleans mostly because I haven’t known what to say. I’m lucky. I don’t know anyone that lived there. I have a friend who is down there now as part of the chainsaw team cutting through the debris. What bothered me most about the aftermath was not the sometimes sluggish response of aid, but the fact that celebrities and political idiots immediately made it about our President and how he did something. I’ve made it no secret that Michael Moore makes me want to cuss. My mom really appreciated “Bowling for Columbine” so I may watch it someday just for that reason. However, I really don’t like him. The things that he said about the horror of Katrina – well… If you haven’t heard, you’re better off. I would post a link to it so you could read it. That would be the ‘fair’ thing to do… But it’s my blog and I don’t want to, so their. I will, however, give you this link. This is Ben Stein’s rebuttal to Moore (at least that’s how it reads). Enjoy it. I’ve decided I really like him, especially since I can hear the unique timber of his voice in my head while I read it!

Captivating
I started a small group study of the book Captivating on Monday. It went really well. I had 13 people there, and am expecting an additional 10-15 this week. It’s a great book with a great message and something women are obviously longing to hear. The hurts and the fears that came out this week are just the tip of the iceberg. I’m looking forward to seeing what God does in all of our lives over the next seven weeks. I have a feeling it’s going to be something amazing. I don’t know what God has planned, but I’m honored to be a part of it. We’ll see what happens. I’ll keep you updated. If you’re a woman looking for your place in God’s plan, pick it up. It will change you.

And, to conclude this entry – some random thoughts –

Work has been crazy. Between my normal job duties and helping out on another print piece, I’ve been swamped. Add to it my other job and I feel like I’m running a marathon in a hamster wheel and not getting anywhere at all. Oh well. I guess it comes and goes, and the extra income is nice.

Is Subway a public company? If so, I should seriously invest in some stock as much as I eat there. I think it’s at least 2 times a week, if not more. I love it. I’m not ashamed to say it! Try the new Buffalo Chicken if you haven’t. It’s good.

I love Iced Animal Cookies. The ones from the nice elves at Keebler. I think they’re fantastic. I bought a bag yesterday and it’s taking a lot of self control to not just eat the whole bag right now. Maybe I really am a kid still. I’m okay with that. There’s something to be said about staying a kid at heart (or at stomach) as long as humanly possible. I also eat a children’s vitamin every single day.

I have something planned for evweekendkend between now and the middle of October. That’s a little overwhelming. It’s all good stuff, though – fun stuff. Just a lot of it. Kentucky Kingdom with Tim on Saturday, next weekend is the Hoosiers Outrun Cancer walk, then home for a weekend to get pictures taken with Cameron. The next weekend Jenny, Liz, and I are getting together for some much needed girl time. The next weekend is the Jars of Clay concert (with Sara Groves and Donald Miller) here at the church. It’ll be great. I’ll be tired, but it will be worth it.

So, that’s a little bit of what’s been going on in my life lately. I’ll try to not wait so long in between updates again…