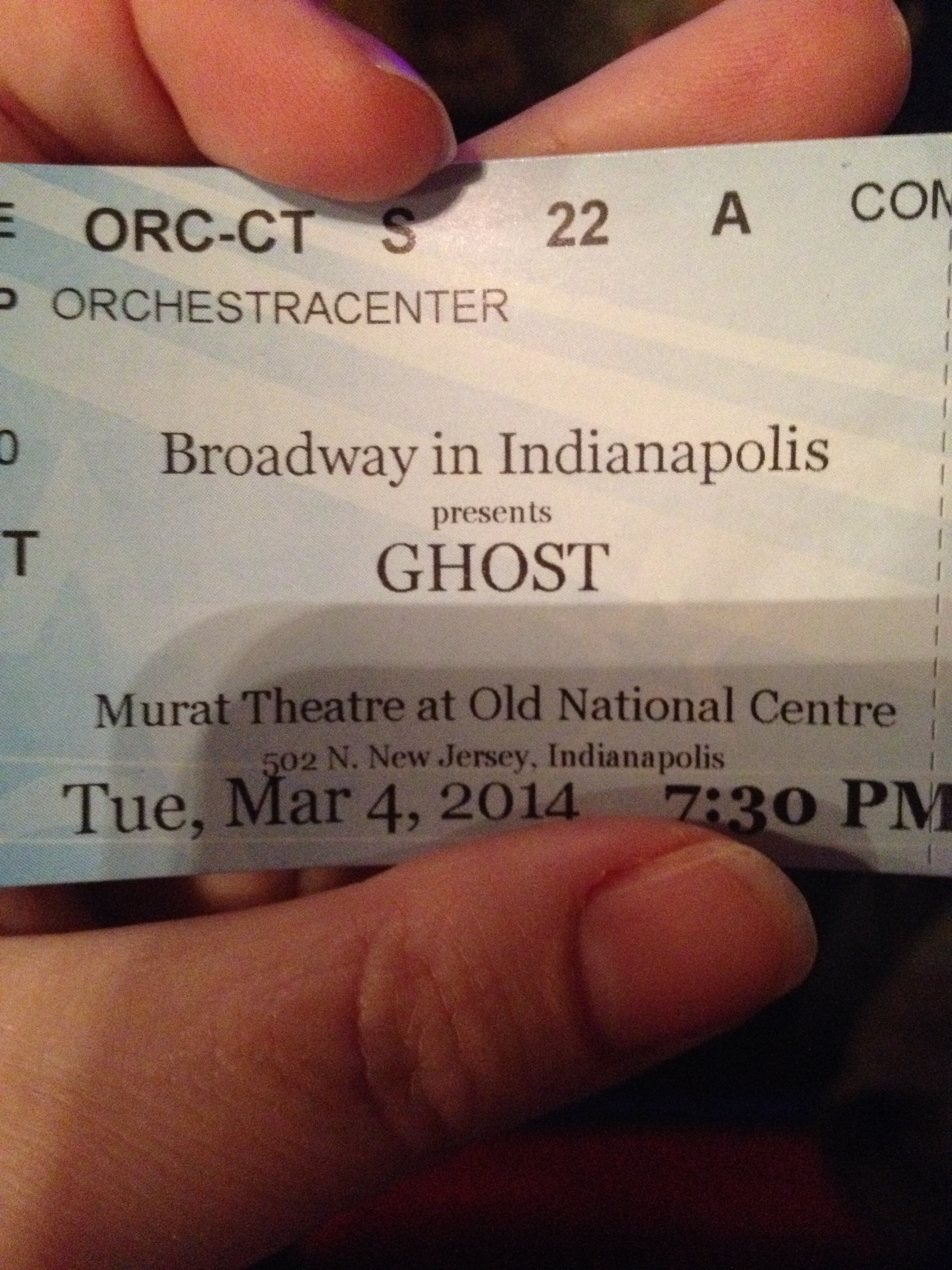 Last night I was given free tickets via Broadway in Indianapolis to attend the opening night of Ghost the Musical at the Old National Centre (which will still always be the Murat to me). My friend Sarah and I went and met up with some of the Indianapolis social media reviewers before the show for yummy food and great conversation. Someday I’ll write a whole blog post about how social media has made it so much easier for me to reach and meet new people. Today is not that day.

The musical, based on the 1990 movie starring Demi Moore and Patrick Swayze as Molly and Sam, respectively, is an interesting blend of a fairly serious story and big musical numbers. If you don’t know the story, Sam and Molly are dating, living together and in a solid relationship, He’s a banker; she’s an artist. One night, Sam is killed in a mugging, but has unfinished business that keeps him from moving on to the afterlife. The rest of the story involves Molly reconciling herself to Sam’s death, the real cause of his murder and Sam speaking to Molly through the hilarious and larger than life Oda Mae Brown, a pretend Psychic with real abilities.

As a live production, Ghost pulls out all stops when it comes to technology and the technical side of theatre. The use of projectors, lighting, fog, slight-of-hand, blocking and scenery creates a visually stimulating and provocative experience. Making a live actor appear to be a Ghost requires precise movement and choreography, which the actors handled like pros. It never felt like the cast was walking around Sam or avoiding his physical presence. Instead, the action moves seamlessly around Sam, creating an undetectable bubble around him. The scenes where Sam tried to touch people and move objects were especially well done, using auditory clues that helped the audience believe that Sam wasn’t really there in the physical world.

Without a doubt, the actress playing Oda Mae Brown steals the show (There was a Playbill snafu that led to me not being able to tell you her name). She is the comic relief and real heart of the musical. Her response to the realization that she really can hear Sam, and her tender interactions with Molly throughout the second half of the show, prove that the actress has not only the vocal chops to tour, but the acting talent to breathe life into a show that just doesn’t feel like it really has all the kinks worked out quite yet.

The idea of turning Ghost into a musical is an interesting one that didn’t quite work for me. The musical numbers felt out of sync with the more serious tone of the story, and the use of the classic Unchained Melody became a little too much for me after a while. The actors were all talented, both musically and acting-wise, but the entire production felt forced and off to me. I will admit that I went into the show a little cynical about it; how do you turn a movie about a ghost into a big, Broadway show? The result, it seems, was that it’s pretty hard. There are a lot of great elements and I wanted to like the show a lot more than I did. Ultimately, however, it felt like it was trying to hard to be something that the story isn’t. As a play, it could have worked. As an over-the-top spoof, it could have been hilarious. But, what it was now felt like it was in that awkward phase of not knowing exactly what it was supposed to be.