The challenge of taking an iconic film that has shaped countless lives and turning it into something that fits the stage is no easy task. I wasn’t sure what to expect when I settled into my seat at Clowes Memorial Hall for opening night of The Wizard of Oz in Indianapolis.

A quick internet search revealed that this is early in the run of a total re-imagining of the show, complete with new songs, technology and sets. From the opening curtain, you can tell that the young cast is loving being a part of something that is such a part of American history. The dual casting of many of the characters is obvious as they roll onto the stage, prepping the farm, fighting against the evil neighbor, and trying to find Dorothy in the oncoming storm. Muted Kansas is just 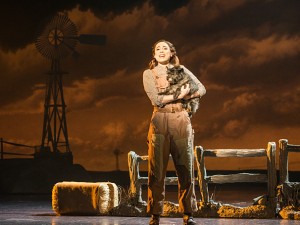 that – dull and normal. Costume, set and lighting choices make the transition to Oz visually beautiful and stunning.

Sarah Lasko’s Dorothy is both innocent and fierce. She is a misfit on her Kansas farm, but finds a purpose and passion among the fellow misfits that make up Oz. The Scarecrow, Tin Man, Cowardly Lion, Glinda and the Wicked Witch are all there in their glory, each getting a moment or two to really shine. Even Toto steals his scenes, maybe because the audience is waiting to see what he will do.

I loved the additional songs, written by Tim Rice and Andrew Lloyd Webber, especially the poignant Wonders of the World when Dorothy meets Professor Marvel and the Wicked Witch’s lament, Red Shoes Blues.

Overall, the show is a fun, family-friendly couple hours of theater (the flying monkeys and Wicked Witch may scare young children). The first 20 minutes of the show felt a little crazy and rushed and the use of the screens to hide the transitions from Kansas to Oz and back again are effective, but a little long.  The biggest distraction of the night came from the auditorium staff (we were seated on the aisle and could hear them talking and flashing their lights regularly) and a seemingly high number of missed mic and tech cues.

The Wizard of Oz runs through Sunday, January 17 at Clowes Memorial Hall on the campus of Butler University.

As usual, thank you to Broadway in Indianapolis for the tickets in exchange for an honest review of the show!