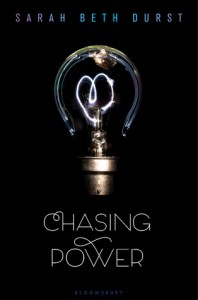 note: I was given an advanced copy of this book from NetGalley in exchange for an honest review.

Chasing Power is not about electricity. Let’s get that out there first. The cover reminded me so much of City of Ember that I was a little confused for a bit. Once I got past the cover, though, I was quickly swept into a world of magic, travel, ancient mysteries and corrupted families. Kayla and her mom, now going by Moonbeam, have relocated to Santa Barbara to hide from her father, who has already killed one member of the family, Kayla’s sister, Amanda. Born with the gift of telekinesis, Kayla and her sister had a rare and special gift her father wanted to use for his own good.

Kayla spends her days using her gift (against her mother’s wishes) and hanging out with her best friend. And then Daniel enters his life. Also magical, Daniel is able to teleport and needs Kayla’s help finding his mother, who has been taken against her will. What follows is a series of world-hopping, life changing adventures for Kayla and Daniel. From mystic temples to ancient crypts to the deep South, Chasing Power is about the quest to keep powerful magic from falling into the wrong hands, and the decision to do what is right, even when it’s hard.

I enjoyed Chasing Power. It was a quick read, even though I had to go back a couple times and figure out who was talking and when. The story moves as quickly as Daniel, jumping from place to place and back again in just a matter of pages. Chasing power reminded me a lot of Natalie Whipple’s Transparent and the deep South voo-doo mojo in the Beautiful Creatures series. Chasing Power moves quickly and leaves the reader both exhausted and energized at the end. Kayla is easily the most developed character, and I found the differences between her character and the rest of the characters obvious sometimes. However, author Sarah Beth Durst does a great job of not complicating the story with too many extra characters. Each character has a specific purpose and plays into the story in a specific way. No words are wasted, that’s for sure!