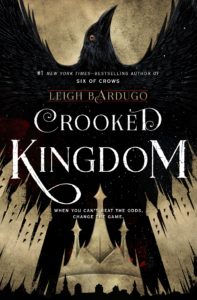 Dang it, Leigh Bardugo and your crazy Grisha world.

First of all, you need to know that I adore these books, just as I loved the original Grisha trilogy. Bardugo’s world is high fantasy, high adventure and totally believable. When I first read that there would be a Duology based on the Grisha world but without (most) of my favorite characters from the original series, I was skeptical. Six of Crows proved me wrong, and this sequel lived up to my expectations.

Having succeeded in their daring escape from the Ice Palace, Kaz and his band of misfits were double-crossed for the promise of a mysterious drug that enhances the power of the Grisha, but at a horrible cost. Now, Kaz and the crew are forced to mount a daring rescue, protect the team and get out of town before it gets even more dangerous.

Crooked Kingdom is an action-packed tour of Ketterdam and the Grisha world that demands you keep reading. At every turn, Kaz seems outsmarted and outnumbered, but is he? Has he finally met his match in Van Eck? Will he be able to save the people he loves and get them all out safely?

Bardugo is a creative powerhouse that keeps the story spinning through a confusing twist of grain silos, underhanded card games, and mystical powers that could save everyone – or destroy them.