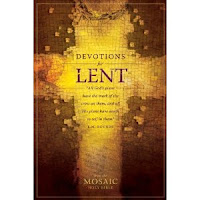 I’ve never been someone who has given anything up for Lent.  I’ve never really understood the custom, not being Catholic or really understand a lot about the whole reasoning.  I’ve always admired the people that choose to make the sacrifice, but have always, in my somewhat cynical way, wondered about the motives behind their sacrifices.

But this year, I’m thinking a little differently about it.  A little.  I still kind of feel like it’s confusing – almost like making a New Year’s Resolution; I don’t know when I made a resolution that I really thought I could keep.  All of my good intentions in the world can’t make me follow through on so many of those resolutions I attempt to make each January.  And, I’ve always thought of Lent kind of the same way – party hard on Tuesday and then be pious on Wednesday?  Do people who observe Lent really spend their time of sacrifice thinking about the significance of Easter, the cross, or the empty tomb?  Or is it just something they check off their list?  Does giving up chocolate or Facebook or…whatever…really create a sacrificial heart?  I think those things definitely could be done with pure motives, but I wonder if there needs to be a second part of the giving up that goes along with it…does that make any sense?

Since I have never participated in Lent, I don’t have the answers, at all.  But I am curious about the experience and what it means.  So, I’ve decided to attempt to actively participate in Lent for the first time this year.  In addition to giving up something (still trying to figure out what) I am going to be using this book to guide my Lent experience.  I think some sort of devotion is important, and this one had good ratings on Amazon, so we will see what happens.

I don’t want to just give anything up – not because I don’t want to make the sacrifice, but because I want it to be more than not drinking diet mt. dew for 40 days…but what is significant?  If you observe Lent, what are you giving up?  Why?  How did you choose?  Would you like to join me in my Lent devotions and experience in 2011?