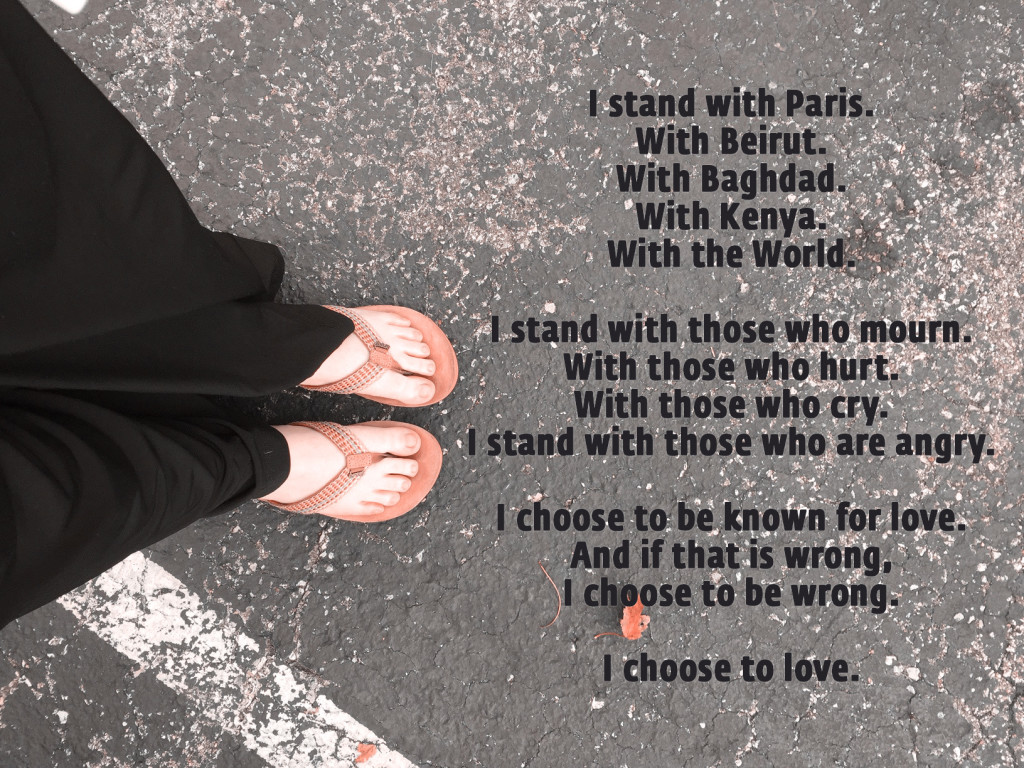 Oh, this world. It makes me weary and breaks my heart so many times. As I watched the news unfold from Paris this weekend, I couldn’t help but think…oh, the sorrow. Oh, the sadness. Oh the pain. The world is so broken and angry all the time. And I can do nothing about it.

And then there is social media. Ugh. I don’t even know. After the immediate outrage, it’s been sickening to read. The accusations, the ridiculousness, the…stuff. The assumption that saying you’re praying for Paris means you agree with everything their government does; the idea that praying for those seeking asylum means you’re supporting terrorism; the idea that grieving for people that aren’t your nation makes you blind to the “real terror” of the world; it’s all sickening. Then the articles start appearing. You know the ones I’m talking about – the ones that say that if you’re standing with Paris, you’re somehow wrong. This morning I saw an article that basically said if you’re supporting the people of Paris, you’re supporting basically everything that is wrong with the world. I won’t link to it because I think vitriol like that doesn’t deserve to be spread.

Stand with Paris. Stand not with politicians and agendas. Stand instead with hurting people and broken lives. No one should go to a concert on a Friday night and be shot down like they don’t matter.

Stand with Baghdad and Beirut. Stand with broken dreams and forgotten horrors. I don’t watch the news enough to know all the evil that happens.

Stand with Kenya (and Africa). Old news is still news. The battles being waged all over the continent of Africa are scary, dark and truly dangerous. Every day people lose their lives to extremists and zealots.

And, if, in the end, it is determined that my naive idealism was my downfall, I’m okay with that. I choose to be wrong if choosing to stand and love is wrong.