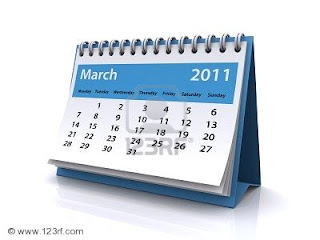 March has come in full of sunshine and promise.  I cannot believe that two months of this year are already gone.  In the first two months of 2011, I have blogged 64 times.  That is more than the last two years combined, so I am going to consider that a success.  I apparently missed 5 days in those two months, which isn’t so bad, in my humble opinion.  It’s not every day, but considering how crazy life can be, I think it’s a really good start.

There isn’t much to recap, seeing as how I have blogged so much!  I am disappointed that I didn’t get nearly as much reading done in February as I did in January.  My Thirty-One business took up a large portion of my time, and my class this semester is one bit of busy work followed by another, so February felt crazy and overwhelming at the same time.

There are still definite changes in the air.  And, I go back and forth between being terrified of them and being willing to embrace them for what they are.  I suppose that’s a fairly normal reaction to life in general, both professionally and personally.  There has to be a little trepidation in change, otherwise the change might not be worth it at all!

I am looking forward to what March has to hold – more Thirty-One shows, time with both sides of my family, blooming flowers, SPRING, sunshine and more.

My goals for March are simple:

I want to leave March a better friend, wife and daughter than I am coming into it as.  That’s a tall order, but a challenge I am ready to experience!