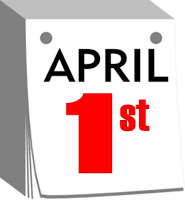 April Fools’ Day is one of my least favorite days of the year.  I don’t mind the harmless little pranks (okay, maybe I mind them a little), but it’s the outright lies followed by “April Fools’!” that just bother me.  I know part of it is because I am really gullible and believe way more than I should when people tell me stuff.  Instead of gullible, I’m going to just say I’m really innocent.  I would never think someone would lie to me, so when they do, I’m somewhat shocked! (Makes me sound better, anyway).

The Anderson, South Carolina newspaper, the Independent Mail says that the holiday began “in France when the Gregorian calendar was introduced, moving New Year’s Day from April 1 to January 1.

As several sites noted, verbatim: “Communication traveled slowly in those days and some people were only informed of the change several days later. Still others, who were more rebellious, refused to acknowledge the change and continued to celebrate the beginning of a new year on April 1.

“These people were labeled ‘fools’ by the general populace, were subject to ridicule and sent on ‘fool errands,’ were sent invitations to nonexistent parties and had other practical jokes played upon them. The butts of these pranks became known as a ‘poisson d’avril’ or ‘April fish’ because a young, naive fish is easily caught.” That theory is labeled “undetermined” by Internet spoofbusters, most notably www.snopes.com.”

So no one really knows why we do this to each other!  Nice!

I guess I just don’t get it.  Don’t get me wrong, I love to have fun and laugh and enjoy myself, but I guess I just see too many pranks going too far, or too many news stories that are just accurate enough to be almost believable.  If you’re going to do something for April Fools’, maybe it’s better to go big or go home! At least then people know they’re being fooled.

Okay, time to head back over to facebook and discount all the “I’m pregnant,” “I’m moving,” “I’m XXXXXX.” posts.  Social media has made April Fools’ Day an almost dangerous game.  “News” travels so fast you have to be careful – the lie can spread faster than the truth!