Have you ever really wanted to write a blog, started it a dozen times, and then not finished? Well, that is how this one has been. It’s something I want to write, but it’s been hard. Hard because there are some emotions involved. Hard because, with time and distance, it seems silly?

That’s this post. I’ve sat on it off and on for two years, sometimes mad, sometimes thinking it’s not worth writing. Then, today, the photo that prompted it all showed up in my time hop. 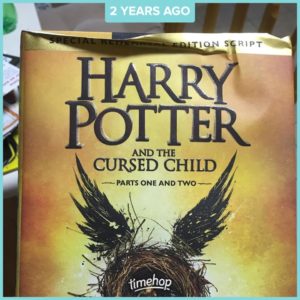 The caption with the picture reads “not only does amazon not deliver on release day, but my book is all jacked up. #disappointed”

I was annoyed that my book had come mangled after a shipping mishap, and put the photo up. Looking back, it wasn’t worth the social media post, but I don’t regret that I did it. I have a lot of bookish friends and we were all waiting – anxiously – for the latest installment in the life of the boy who lived. I had a good laugh about it with some friends, called Amazon and got a replacement book, and set this one aside to send back. And went on with my day.

The next morning, I opened the blog of a mutual friend of mine and saw that my mini rant/annoyance was pointed out, in just a sentence in her blog. It was a blog about struggles in her life and my seemingly less than important issue. I saved the blog because it bothered me that much, but I won’t quote it here or link it. I think it was written in a moment of high emotion for her, as well. The summary of it was this: can you believe that people complain about these things when the world stinks so much sometimes?

She took issue with my annoyance (and called me out on it without mentioning me) because there are hungry people in the world that need our help.

My “issue” was not an issue because there are people in the world whose lives are much worse than mine.

Buying a book, movie, shirt (insert whatever your latest purchase was here) doesn’t lessen your compassion for the world.

Now, don’t get me started on that whole #firstworldproblems hashtag that floats around on social media every now and then…that’s another blog for another day.