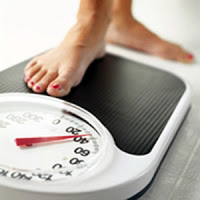 So this morning the inevitable happened:  I didn’t gain weight while on Weight Watchers.  Instead, I gained a little bit back.  It’s funny.  I was expecting it.  I know what I ate this weekend, and I know I didn’t make the healthiest choices in the world.  So, it shouldn’t have come as a surprise.  Still, seeing that “+” instead of the usual “-” on the card struck me to the core.  I couldn’t help but be angry and disappointed in myself.  I smiled to the worker, took my card and pamphlet to my usual chair – and then put my head down and felt a couple tears roll down my cheek.  That’s when it hit me.  Losing weight is an emotional battle, too.

The numbers on the scale are just numbers, taken at one moment in time.  For all I know, I could get on the scale tomorrow and that plus would be a minus again.  It’s not usual for that to happen.  But, instead of just shrugging my shoulders and resolving to do better this week, I let it get emotional for me.  I let that evil little voice that says I can’t do it, that I’ll always be heavy, win for a moment today.  And then, because I’m logical like that, I got mad at myself for falling into that same old trap!

I’m not gonna lie – I still haven’t completely shaken the disappointed feeling.  I’m still feeling a little sad about it and a little bummed that I have to re-lose the weight this week.  But, I know in my head that it’s not the end of anything – it’s just the natural process of ebbing and flowing and ups and downs.  I’m not excusing it, but I also know it’s not the end of the world.  I wonder why I let it get to me so much sometimes.  Because, certainly, it’s not worth tears.  It’s not even worth disappointment or anger.  It’s just what it is – and accepting it and moving on is the healthiest thing I could do.

So today, I’m back on the ‘wagon’ again.  Writing it all down and drinking lots of water.  I’m hoping this week is better than last week, too.  But, even if it’s not, I’m hoping I learn to be stronger about it and face the up weeks with confidence, as well.  Instead of running to comfort foods, I’m running to writing.  I guess that’s a step in the right direction.