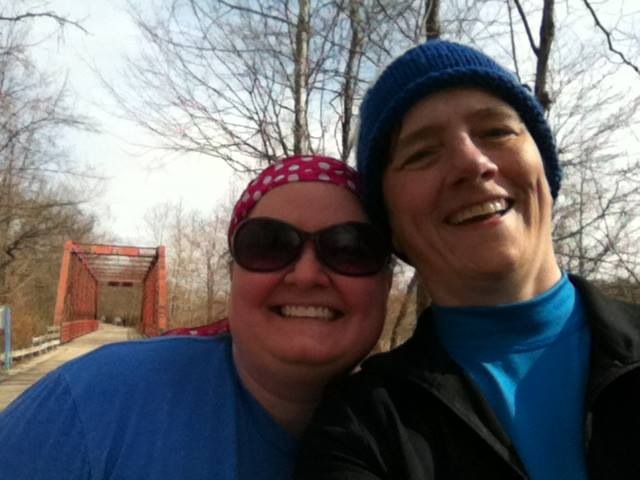 In a moment of insanity, I let my lovely friend Jenni talk me into walking the Indianapolis Mini Marathon. Prior to this, I can sum up my athletic ability in about 2 sentences: 6th grade basketball, 7th grade cheerleading, and I think I ran track for a bit at some point, but that was probably elementary school. Since then, semi-regular walking, an attempt or two at jogging, and the annual Race for the Cure with my mom. That’s about it. So, I thought this would be a great challenge, and something I could check off my 40 before 40 list.

And then this winter happened. And the bitter cold. Which has made training really hard, but still doable. A few miles here and there, thinking it was just mind over matter because it’s JUST WALKING AND THAT’S NOT HARD.

Except, turns out walking 13.1 miles at a pace that won’t get you picked up by the slow mover truck isn’t really easy, at all. And then, you add to that the fact that I have been plagued by horribly painful shin issues, and its even harder.

Today, Jenni and I went out to do some miles in an attempt to knock some time off our average. Instead, I was as slow as I had ever been, and in good pain, for the first 2-2.5 miles. Honestly, about a mile in, I just wanted to cry. I felt like a failure and I was just holding Jenni back. I tried to tell her she could leave me and I’d catch up, but she wouldn’t. She’s awesome like that. Instead of being frustrated or annoyed at my pain, she kept telling me I could do it and she was proud of me. It was a humbling experience, that’s for sure. It’s not everyone who would turn down their routine, just for someone else. It’s not just anyone that refuses to let you give up on a challenge, just because right now it’s hard.

Thank you, Jenni. For believing in me when I don’t believe in myself.

So today is coming to a close. My legs are still tired and sore. I’m fighting feeling like today was a failure, even though I still did 5 miles and we cut almost 2 minutes off from the first mile to the last. I want to finish the mini. I want to say I did it and be proud. Even when there are days when it feel like it’s going to be a lot harder than I ever originally thought!

Correction, I WILL finish the mini. Because I’m stubborn like that.