(SPOILER ALERT:  Don’t read this if you have never seen Fiddler on the Roof and don’t want to know the ins and outs of the story) 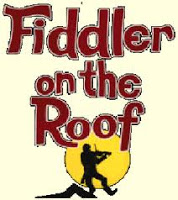 On Tuesday, Tim and I went to see Fiddler on the Roof for an early Valentine’s Day present.  I love theatre, so any live show is a great gift to me!  Anyway, I have seen Fiddler a couple times, but it has always been done by community theatres or high school companies, never a touring show.  And, don’t get me wrong, they have been good productions, but I was still excited to see it done by a “professional” company.

There are many parts of the show that speak to me, but none more so than the idea of traditions! The show opens with the song “Tradition.” In this small town, every one has a place and a role. Their job is to fulfill that role. No questions, no deviations. Tevye, the papa, prides himself on upholding those traditions. It is only when his daughters chose to marry for love instead of marrying who he has chosen that he has to take a moment to see if his traditions are really worth losing his family over.  His eldest falls in love with a childhood sweetheart, and begs to not be married to the older man in the community that could give her a ‘rich’ life.  The middle daughter falls in love with the radical, and chooses to love him despite the fact that it will be a hard life.  The third falls in love with someone who isn’t Jewish, and loses her family because she chose love instead of tradition.

All three daughters challenge Tevye’s beliefs and expectations.  And, he learns that some traditions are okay to bend, and some he’s not willing to lose.

Sometimes I look around and see a lot of traditions in my own life. I see things that happen because that’s the way they’ve always happened, and I see things that no one questions.  I wonder if my traditions are born of a solid foundation, or are they simply the way things have always been?  There is definite value in tradition, but I think questioning them is also okay – because then you learn why you believe the things you do and do the things you do.  You learn to not follow blindly, but create and pass on traditions based on your life, your history, and your faith.

Examining traditions is important; and learning what you believe and why you believe it is critical. In college, I was in a hilarious skit called “What Was I Thinking?” (I think…I honestly don’t know if that is 100% accurate).  Liz, Aub and I had a great time with it, and in all it’s cheesy-ness, there was a glimmer of truth in it – finding out what you believe – and being able to articulate it clearly.