It’s time for another great Book Tour with TBR AND BEYOND BOOK TOURS! This time, I jumped deep into the world of Rumpelstiltskin in this fantastic retelling, Gold Spun, by author Brandie June.

Check out the Full Tour Here

Content Warnings: One mild scene of cutting for blood magic.

If Nor can’t spin gold, she can always spin lies.

When seventeen-year-old Nor rescues a captured faerie in the woods, he gifts her with a magical golden thread she can use to summon him for a favor. Instead, Nor uses it for a con—to convince villagers to buy straw that can be transformed into gold. Her trick works a little too well, attracting the suspicion of Prince Casper, who hates nobody more than a liar. Intent on punishing Nor, he demands that she spin a room of straw into gold and as her reward, he will marry her. Should she refuse or fail, the consequences will be dire.

It’s always been up to me to make sure we have a plan.

I am a sucker for a good retelling of any story, and this is a unique look at the Rumpelstiltskin story, with a fiery protagonist who might just be in a little too deep for her own good. From the beginning, Gold Spun lets readers know that this isn’t the straw into gold story you thought you knew. Instead, this is the story of fey and bartered kingdoms, of death and destruction and weird, unlikely alliances. This is the story of kingdoms on the brink of chaos and the unlikely people who might save them – or watch the world burn while they try.

When human Nor comes face to face with her first real faerie, she realizes everything she’s been told might not quite be accurate. I loved this description as she meets Pel for the first time, “I almost couldn’t believe it, but there he was. And he looked nothing like the monsters they flyers warned us about. he looked stunningly, painfully beautiful.” This chance meeting leads to an unlikely alliance, not quite a friendship, not quite anything more, that comes to head when Nor tries to use a small gift from Pel to get ahead in life, and instead finds herself stuck in a palace, with straw into Gold as her only way to freedom.

June is a talented writer who manages to weave the familiar elements of the folktale with a whole new adventure as the headstrong and action-oriented Nor finds her place among the elite – and has to decide whether or not she is willing to risk everything to help the future King, Caspar, see the world he has inherited beyond the castle walls.

Gold Spun is full of fun, action, and adventure. There is a little magic, a little romance, and a little forbidden obsession that just might destroy their world. The book ends of a cliffhanger, and I can only hope that I get the opportunity to catch up with Nor, Caspar, Pel and their warring kingdoms sooner rather than later.

Get your copy today: 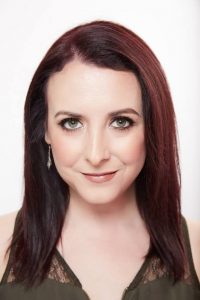 Brandie June loves storytelling in all sorts of formats, whether she is marketing animated movies or writing fantasy novels. Most of her early life she was on stage or at least as close to the front row as she could get. Initially an actor, she got her B.A. in Theatre from UCLA and branched out into costume design and playwriting, eventually getting her M.B.A. Her first stand-alone play, a dark comedy about Oscar Wilde, premiered at the Hollywood Fringe Festival to a sold-out run and won the Encore Producers Award. As a writer, she is especially passionate about fantasy and mythology, has published several pieces in anthology, and is a recent finalist with The Writers of the Future Award. Her debut novel, Gold Spun, is a fresh retelling of the Rumpelstiltskin tale through the miller daughter’s POV. Except now the miller’s daughter is a con artist and Rumpelstiltskin is a mysterious faerie with a dark secret.